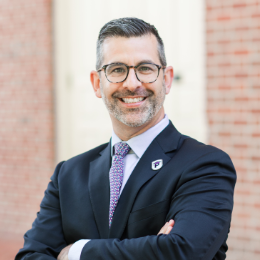 Dr. James Toscano serves as a board member and senior advisor at Partners for College Affordability and Public Trust and is a national leader in the fight to make college more affordable for American students and families. With a career that spans both public policy and higher education, Toscano brings a practitioner’s perspective to bear on both the challenge--and opportunity--of transforming institutions of higher education. During Toscano’s tenure as a vice president at Tidewater Community College, one of the largest in the U.S., the college was the nation’s leader and model for lowering the cost of education for students through the innovative use of open educational resources.

An advocate for elevating the consumer voice in public decision making, Toscano’s passion took root as a student when he served on his university’s board of trustees under a new state law. Since that time, he’s been a leading voice on opening up public governing boards to stakeholder input via traditional public participation and digital methods. He started his career as a legislative staffer in the Virginia General Assembly. Toscano has served out terms in various policy board appointments under two former Virginia governors, and in 2018 he served on the Higher Education Policy Commission during the transition of Virginia Governor-Elect Ralph Northam. Toscano’s commentary and research can be found in The Washington Post, GOVERNING, Government Technology, Public Management magazine, The Conversation, and opinion pages throughout Virginia.